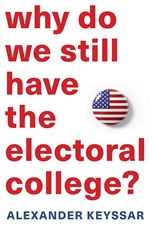 Why do we still have the electoral college?

With every presidential election, Americans puzzle over the peculiar mechanism of the Electoral College. The author of the Pulitzer finalist The Right to Vote explains the enduring problem of this controversial institution.

Every four years, millions of Americans wonder why they choose their presidents through the Electoral College, an arcane institution that permits the loser of the popular vote to become president and narrows campaigns to swing states. Most Americans have long preferred a national popular vote, and Congress has attempted on many occasions to alter or scuttle the Electoral College. Several of these efforts—one as recently as 1970—came very close to winning approval. Yet this controversial system remains.

Alexander Keyssar explains its persistence. After tracing the Electoral College’s tangled origins at the Constitutional Convention, he explores the efforts from 1800 to 2020 to abolish or significantly reform it, showing why each has failed. Reasons include the complexity of the electoral system’s design, the tendency of political parties to elevate partisan advantage above democratic values, the difficulty of passing constitutional amendments, and, importantly, the South’s prolonged backing of the Electoral College, grounded in its desire to preserve white supremacy in the region. The commonly voiced explanation that small states have blocked reform for fear of losing influence proves to have been true only occasionally.

Keyssar examines why reform of the Electoral College has received so little attention from Congress for the last forty years, and considers alternatives to congressional action such as the National Popular Vote Interstate Compact and state efforts to eliminate winner-take-all. In analyzing the reasons for past failures while showing how close the nation has come to abolishing the institution, Why Do We Still Have the Electoral College? offers encouragement to those hoping to produce change in the twenty-first century.

Introduction
I. Origins
1. From the Constitution to the Twelfth Amendment
II. The Long Struggle to Abolish Winner-Take-All
2. Electoral Reform in the Era of Good Feelings
3. Three Uneasy Pieces, 1870–1960
III. A National Popular Vote
4 “A Population Anomalous” and a National Popular Vote, 1800–1960
5. An Idea Whose Time Has Come
6. Last Call for the Twentieth Century
IV. Partisan Stalemate and Electoral Misfires
7. Pessimism and Innovation, 1980–2020
Conclusion
Appendix A. Public Opinion Polls
Appendix B. Constitutional Provisions for Presidential Elections
Appendix C. The Evolution of the Term Electoral College
Abbreviations
Notes
Acknowledgments
Index