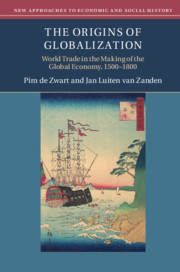 The origins of globalization
world trade in the making of the global economy, 1500-1800

For better or for worse, in recent times the rapid growth of international economic exchange has changed our lives. But when did this process of globalization begin, and what effects did it have on economies and societies? Pim de Zwart and Jan Luiten van Zanden argue that the networks of trade established after the voyages of Columbus and Da Gama of the late fifteenth century had transformative effects inaugurating the first era of globalization. The global flows of ships, people, money and commodities between 1500 and 1800 were substantial, and the re-alignment of production and distribution resulting from these connections had important consequences for demography, well-being, state formation and the long-term economic growth prospects of the societies involved in the newly created global economy. Whether early globalization had benign or malignant effects differed by region, but the world economy as we now know it originated in these changes in the early modern period.

The strictures of inheritance