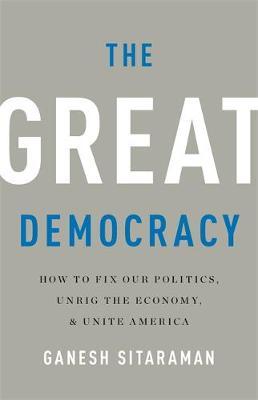 The great democracy
how to fix our politics, unrig the economy, and unite America

Over the last four decades, neo-liberalism has been the force shaping America and the world, its logic of the market applied to every aspect of life. But now, amid a new Gilded Age of inequality and economic stagnation, and in the wake of Donald Trump's election, it is clear that the neo-liberal era has come to an end. The central question of our time is what comes next.

In The Great Democracy, professor of law and progressive policy expert Ganesh Sitaraman argues that the only way forward is more democracy. If America wishes to avoid avoid a future characterised by Trump's oligarchic nationalism - or a warmed-over version of the failed neo-liberal ideas that brought us Trump in the first place - we will need not only to protect and expand political democracy but also to realise true economic democracy in America for the first time in our history. Sitaraman outlines a bold political vision for a "new democracy" resting on three main pillars: (1) protecting and extending political democracy, so that the political process leads to outcomes that represent all Americans, (2) realising an unprecedented level of economic democracy by combating economic inequality and (3) forging social solidarity in a diverse nation, to ensure a united democracy. He proposes policies to achieve these ends, ranging from compulsory voting to statehood for Puerto Rico and other US territories to aggressive regulation of big tech companies to a national service program and a National Endowment for Journalism.

At a time when American politics is in disarray, The Great Democracy demonstrates persuasively that we must choose to build a new era of robust democracy, offering a compelling call to action and a realistic road map for achieving it. It is time to play hardball in service of democracy, Sitaraman argues and to win the fight against oligarchy once and for all.