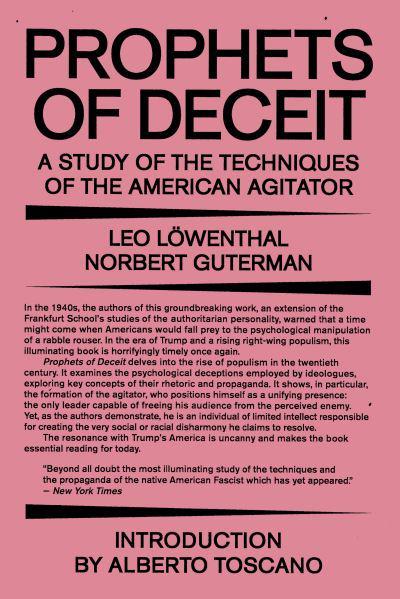 How authoritarian and racist discourse functions

A classic book that analyzes and defines media appeals specific to American pro-fascist and anti-Semite agitators of the 1940s, such as the application of psychosocial manipulation for political ends. The book details psychological deceits that idealogues or authoritarians commonly used. The techniques are grouped under the headings "Discontent", "The Opponent", "The Movement" and "The Leader". The authors demonstrate repetitive patterns commonly utilized, such as turning unfocused social discontent towards a targeted enemy. The agitator positions himself as a unifying presence: he is the ideal, the only leader capable of freeing his audience from the perceived enemy. Yet, as the authors demonstrate, he is a shallow person who creates social or racial disharmony, thereby reinforcing that his leadership is needed. The authors believed fascist tendencies in America were at an early stage in the 1940s, but warned a time might come when Americans could and would be "susceptible to ... [the] psychological manipulation" of a rabble rouser. A book once again relevant in the Trump era, as made clear by Alberto Toscano's new introduction.