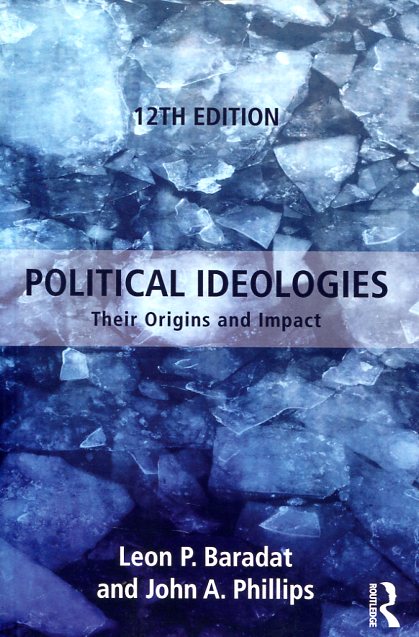 Political ideologies
their origins and impact

Comprehensive and accessible, Political Ideologies follows the evolution of political thought over 300 years. Organized chronologically, this text examines each major ideology within a political, historical, economic, and social context. Leon Baradat's skillful prose is joined by John Phillips' skillful updating to ensure that students obtain a clear understanding of how ideas influence the political realities of our time. The twelfth edition of this beloved text emphasizes new developments in ideologically charged arenas including the Middle East and Islam, gay marriage, feminism, climate change, and more. New to the 12th edition In addition to a thorough updating of examples, detail, and data, the following items are either wholly new or considerably expanded in this edition: The mixed legacy of the Obama administration on civil liberties, foreign policy, health care, immigration, and especially the environment, and the mounting jeopardy to the global environment posed by record-breaking global warming and pollution. The recently developed variegations in conservatism: The Tea Party movement, the expanding political importance of religious extremists, and the growing incivility of its extremists. The Great Recession, its causes and its political fallout. The US tax system's mal-distribution of wealth and its implications for the middle class and American democracy. The reemergence of authoritarianism in the Developing World and Russia. China's continuing economic miracle while maintaining a firm grip on the political system, if through official corruption, but also suffering serious social, environmental, and health problems. The transfer of power from Fidel to Raoul Castro, and the rapprochement of the US and Cuba. Right-wing extremism mounting in Europe, Asia, and the United States. The growing salience of Islamism, the Iran nuclear deal, and the transformation of the Arab Spring to the Islamist Winter. Terrorism's increasing acceptance in certain quarters, especially the spread of ISIS in the Middle-East and its mounting threat to the globe via sleeper cells and lone-wolf attacks. The spreading strength of feminism in the Developing World, and a renewed focus on the gender wage gap and same-sex marriage in the West.