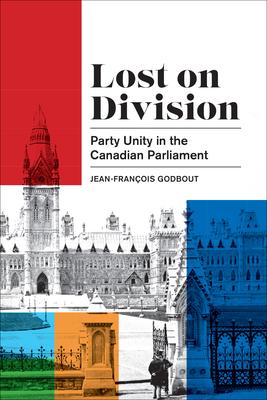 Lost on division
party unity in the Canadian parliament

Compared to other countries, Canada's Parliament shows a high level of party unity when it comes to legislative voting. This was not always the case, however. One hundred years ago, this sort of party discipline was not as evident, leading scholars to wonder what explains the growing influence of political parties in the Canadian Parliament.

In Lost on Division, Jean-Francois Godbout analyses more than two million individual votes recorded in the House of Commons and the Senate since Confederation, demonstrating that the increase in partisanship is linked to changes in the content of the legislative agenda, itself a product of more restrictive parliamentary rules instituted after 1900. These rules reduced the independence of private members, polarized voting along partisan lines, and undermined Parliament's ability to represent distinct regional interests, resulting in - among other things - the rise of third parties.

Bridging the scholarship on party politics, legislatures, and elections, Lost on Division builds a powerful case for bringing institutions back into our understanding of how party systems change. It represents a significant contribution to legislative studies, the political development literature, and the comparative study of parliaments.

1. Introduction
2. The Emergence of Parties in Parliament
3. Theories of Party Development
4. Legislative Records and Parliamentary Voting
5. How Do Members Vote?
6. How Do Parties Unite?
7. Louis Riel and the Catholic Sort
8. Western Discontent and Populism
9. Partisanship in the Senate
10. Conclusion Bibliography