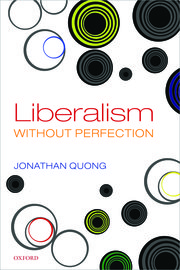 A growing number of political philosophers favour a view called liberal perfectionism. According to this view, liberal political morality is characterised by a commitment to helping individuals lead autonomous lives and making other valuable choices. In this book Jonathan Quong rejects this widely held view and offers an alternative account of liberal political morality. Quong argues that the liberal state should not be engaged in determining what constitutes a valuable or worthwhile life nor trying to make sure that individuals live up to this ideal. Instead, it should remain neutral on the issue of the good life, and restrict itself to establishing the fair terms within which individuals can pursue their own beliefs about what gives value to their lives. The book thus defends a position known as political liberalism.

In the first part of the book Quong subjects the liberal perfectionist position to critical scrutiny, advancing three major objections that raise serious doubts about the liberal perfectionist position with regard to autonomy, paternalism, and political legitimacy. In the second part of the book Quong presents and defends a distinctive version of political liberalism. In particular, Quong clarifies and develops political liberalism's central thesis: that political principles, in order to be legitimate, must be publicly justifiable to reasonable people. Drawing on the work of John Rawls, Quong offers his own interpretation of this idea, and rebuts some of the main objections that have been pressed against it. In doing so, Quong provides novel arguments regarding the nature of an overlapping consensus, the structure of political justification, the idea of public reason, and the status of unreasonable persons.

Acknowledgements
Introduction
1:What Kind of Liberalism?
2:The Argument from Autonomy
3:Paternalism and Perfectionism
4:Justification and Legitimacy
5:A Question Internal to Liberal Theory
6:The Role of an Overlapping Consensus
7:Disagreement and Asymmetry
8:Truth and Scepticism
9:The Scope and Structure of Public Reason
10:Unreasonable Citizens
Conclusion
Bibliography