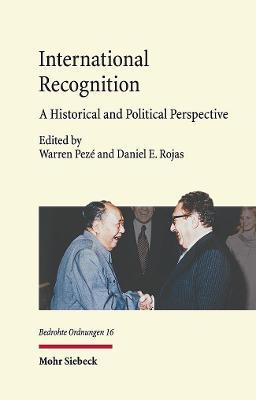 International recognition, which lies at the heart of many contemporary political conflicts (Nagorno-Karabakh, Ukraine, ISIS, Palestine, Libya to name a few), has generally been discussed from the point of view of international law and only as concerning modern history. This volume adopts a much broader perspective by tracing the history of recognition back to the ancient world. It approaches the issue of recognition as a political process where law features as only one of several resources at the disposal of the decision makers. The contributors explore the pivotal moments in the history of recognition on both a European and a world scale: the making of the Roman and Carolingian empires, the Peace of Westphalia, Latin American independence, decolonization, and the Cold War. The comparison brings to light the continuities and discontinuities of recognition within and beyond the historical limits of the modern state.