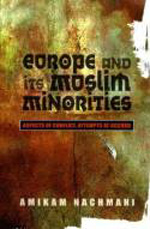 Europe and its muslim minorities
aspects of conflict, attempts at accord

The presence of Muslim communities in Europe is a politically charged issue. Sporadic attacks by radical Muslims have further highlighted the problem of a deep cultural divide between the Muslims and their host countries. There is, however, no one 'Islamic Nation', and a distinction must be made between the radical Muslim minority and secular or practicing Muslims who subscribe neither to the theology nor politics of the radicals. The influx of Muslim immigrants into Europe is rooted in the common human aspiration for a better life. But to date there is no European consensus about how to deal with the political, social, religious, and economic problems associated with their absorption. This book presents a comprehensive picture of the causes and effects of Muslim immigration to the West. It discusses the population explosion in the sending countries, with their declining availability of jobs and increasing desperation. The author highlights the situation of Western countries with their shrinking families and growing workforce shortages, and considers the readiness of the Continent in general and specific countries in particular to allow its Muslim communities access to its culture and wealth or, conversely, to keep them apart. At the heart of the problem lie issues such as the readiness of the immigrants to adapt to European standards and Western culture, Europe's and Christianity's traditional intolerance of "the other", and Islam's fear of loss of its identity. In such a fluid and complex situation, there are few immediate solutions or overriding certainties, but one thing stands out: attitudes of Islamophobia and Europhobia do not adequately explain the situation.