This book presents the results of systematic comparative analyses of electoral behavior and support for democracy in 13 countries on four continents. It is based on national election surveys held in "old" and "new" democracies in Europe (Germany, Britain, Spain, Greece, Italy, Portugal, Bulgaria), North and South America (the United States, Chile and Uruguay), and Asia (Hong Kong) between 1990 and 2004. It is methodologically innovative, notwithstanding the fact that its core concern with "political intermediation" (i.e., the flow of political information from parties and candidates to voters through the mass- communications media, membership in secondary associations, and direct, face-to-face contacts within interpersonal networks) was first introduced to the study of electoral behavior by Paul Lazarsfeld and his collaborators in the 1940s. In addition to reviving that long-neglected analytical framework, this book breaks new ground by systematically exploring the impact of socio-political values on electoral behavior. It also analyzes the role of political intermediation in forming basic attitudes towards democracy (which are crucial for the consolidation of new democracies), and, in turn, channeling those orientations into various forms of political behavior. Some of the findings presented in this volume are dramatic, and clearly reveal that these channels of information are among the most powerful factors influencing the development of political attitudes and partisan electoral behavior. So, too, are socio-political values in some countries (particularly the United States). This volume is the first book-length product of the now 18-country Comparative National Elections Project.

Democracy and the State in the New Southern Europe 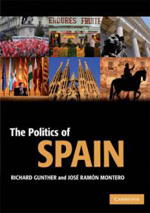 The politics of Spain