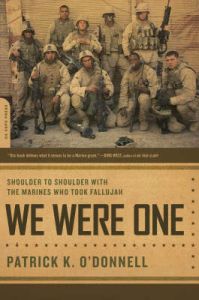 Five months after being deployed to Iraq, Lima Company's 1st Platoon, 3rd Battalion, 1st Marine Regiment, found itself in Fallujah, embroiled in some of the most intense house-to-house, hand-to-hand urban combat since World War II. In the city's bloody streets, they came face-to-face with the enemy-radical insurgents high on adrenaline, fighting to a martyr's death, and suicide bombers approaching from every corner. award-winning author and historian Patrick O'Donnell stood shoulder to shoulder with this modern band of brothers as they marched and fought through the streets of Fallujah, and he stayed with them as the casualties mounted.