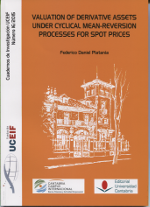 This thesis studies the stochastic behaviour of interest rates and commodity prices, extending the existing literature by allowing the underlying state variable to capture any ossible seasonal or cyclical behaviour. In the first chapter, we propose a nuw model for the term structure of interest rates assuming that the instananeous spot rate converges to a cyclical long - term level characterized by a Fourier series. Under this framework, we derive analytical expressions for the valuation of bonds and several interest rate derivative assets. The second chapter introduces a nes square-root model for the yield curve where both the mean reversion level and the volatility are described by a harmonic oscillator. This model specification incorporates a good deal of flexibility preserving the analytical tractability. In the final chapter, we present a model for the logarithm of the commodity spot price with a reversion to a time dependent long-run level described by a Fourier series, obtaining closed-form expressions for a wide range of derivatives and study the fitting performance to market data.