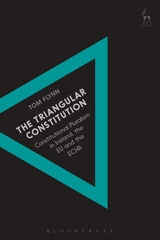 The triangular constitution
constitutional pluralism in Ireland, the EU and the ECHR

This book offers a new account of modern European constitutionalism. It uses the Irish constitutional order to demonstrate that, right across the European Union, the national constitution can no longer be understood on its own, in isolation from the EU legal order or from the European Convention on Human Rights. The constitution is instead triangular, with these three legal orders forming the points of a triangle, and the relationship and interactions between them forming the triangle's sides. It takes as its starting point the theory of constitutional pluralism, which suggests that overlapping constitutional orders are not necessarily arranged 'on top of' each other, but that they may be arranged heterarchically or flatly, without a hierarchy of superior and subordinate constitutions. However, it departs from conventional accounts of this theory by emphasising that we must still pay close attention to jurisdictional specificity in order to understand the norms that regulate pluralist constitutions. It shows, through application of the theory to case studies, that any attempt to extract universal principles from the jurisdictionally contingent interactions between specific legal orders is fraught with difficulty. The book is an important contribution to constitutional theory in general, and constitutional pluralism in particular, and will be of great interest to scholars in the field.