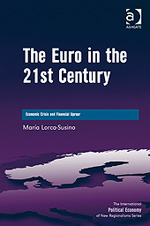 The Euro in the 21st Century
economic crisis and financial uproar

"The Euro in the 21st Century" clarifies the perception of the euro and empirically demonstrates that the euro has become a true common currency and the Eurozone a true optimal currency area, presenting, in turn, a model to imitate. In order to demonstrate this, this study analyzes the economic and monetary requirements and policies required to introduce a common currency as well as the theoretical underpinnings of both the European integration process and the historical economic, monetary, political, and social circumstances that favoured the creation of the economic and monetary union. Furthermore, this book sheds light on how the current economic and monetary circumstances are affecting the euro project through and analysis of three intertwined issues. It studies how the economic chaos and financial uproar, which has plagued the Eurozone and world economy since 2008, has affected the single-currency regime as well as the current image of the euro worldwide. Moreover it summarizes the lesson to be learnt from what can be considered 'the first euro crisis'. Finally, it thoroughly analyzes the behaviour of the US Federal Reserve, the European Central Bank, and the International Monetary Fund during this crisis. This book draws on and contributes to several bodies of literature within Political Economy, Economics, and International Relations and is particularly relevant at this time given that the current unfolding economic imbalances are causing some Eurozone Member States to rethink their economic and political views concerning the euro.