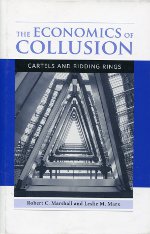 The economics of collusion
cartels and bidding rings

Explicit collusion is an agreement among competitors to suppress rivalry that relies on interfirm communication and/or transfers. Rivalry between competitors erodes profits; the suppression of rivalry through collusion is one avenue by which firms can enhance profits. Many cartels and bidding rings function for years in a stable and peaceful manner despite the illegality of their agreements and incentives for deviation by their members. In The Economics of Collusion, Robert Marshall and Leslie Marx offer an examination of collusive behavior: what it is, why it is profitable, how it is implemented, and how it might be detected. Marshall and Marx, who have studied collusion extensively for two decades, begin with three narratives: the organization and implementation of a cartel, the organization and implementation of a bidding ring, and a parent company's efforts to detect collusion by its divisions. These accounts--fictitious, but rooted in the inner workings and details from actual cases--offer a novel and engaging way for the reader to understand the basics of collusive behavior. The narratives are followed by detailed economic analyses of cartels, bidding rings, and detection. The narratives offer an engaging entree to the more rigorous economic discussion that follows. The book is accessible to any reader who understands basic economic reasoning. Mathematical material is flagged with asterisks.

The economics of collusion