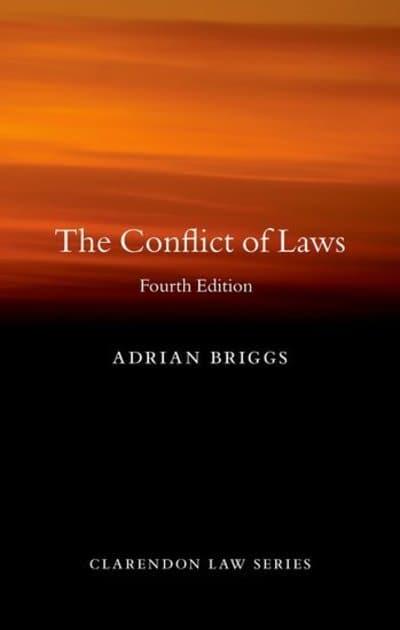 The conflict of Laws

This invaluable introduction to the study of the conflict of laws provides a survey and analysis of the rules of private international law as they apply in England. Written to take account of the various possible outcomes of the Brexit process, it goes as far as is possible to make sense of the effect it will have on English private international law. The volume covers general principles, jurisdiction, and the effect of foreign judgments; the law applicable to contractual and non-contractual obligations, the private international law of property, of adults (the increasingly complex law of children is described in bare outline), and of corporations. It does so in a manner which explains and illuminates the principles which underpin the subject in a clear and coherent fashion, as the wealth of literature, case law, and legislation can often obscure the architecture of the subject and unnecessarily complicate its study. This new edition organizes the existing material in light of European legislation on private international law, reflecting the way in which an accurate representation of the topic requires it to be interpreted as European law with a common law periphery, instead of common law with European legislative influences. As at the time of writing - and possibly for some time to come - the consequences of Brexit are a mystery, but the attempt is made to describe the various possible shapes which the subject will assume in the future. The book adopts a pragmatic approach and avoids the more abstract theory; as the theory of the conflict of laws is actually to be found in and by applying the legislation and jurisprudence to the cases and issues which arise in private international litigation and in giving legal advice.