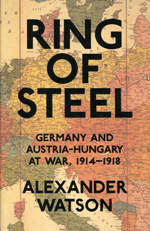 For the empires of Germany and Austria-Hungary the Great War - which had begun with such high hopes for a fast, dramatic outcome - rapidly degenerated as invasions of both France and Serbia ended in catastrophe. For four years the fighting now turned into a siege on a quite monstrous scale. Europe became the focus of fighting of a kind previously unimagined. Despite local successes - and an apparent triumph in Russia - Germany and Austria-Hungary were never able to break out of the the Allies' ring of steel. In Alexander Watson's compelling new history of the Great War, all the major events of the war are seen from the perspective of Berlin and Vienna. It is fundamentally a history of ordinary people. In 1914 both empires were flooded by genuine mass enthusiasm and their troubled elites were at one with most of the population. But the course of the war put this under impossible strain, with a fatal rupture between an ever more extreme and unrealistic leadership and an exhausted and embittered people. In the end they failed and were overwhelmed by defeat and revolution.