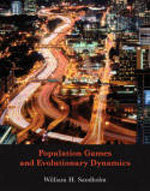 This text offers a systematic, rigorous, and unified presentation of evolutionary game theory, covering the core developments of the theory from its inception in biology in the 1970s through recent advances. Evolutionary game theory, which studies the behavior of large populations of strategically interacting agents, is used by economists to make predictions in settings where traditional assumptions about agents' rationality and knowledge may not be justified. Recently, computer scientists, transportation scientists, engineers, and control theorists have also turned to evolutionary game theory, seeking tools for modeling dynamics in multiagent systems. Population Games and Evolutionary Dynamics provides a point of entry into the field for researchers and students in all of these disciplines. The text first considers population games, which provide a simple, powerful model for studying strategic interactions among large numbers of anonymous agents. It then studies the dynamics of behavior in these games. By introducing a general model of myopic strategy revision by individual agents, the text provides foundations for two distinct approaches to aggregate behavior dynamics: the deterministic approach, based on differential equations, and the stochastic approach, based on Markov processes. Key results on local stability, global convergence, stochastic stability, and nonconvergence are developed in detail. Ten substantial appendixes present the mathematical tools needed to work in evolutionary game theory, offering a practical introduction to the methods of dynamic modeling. Accompanying the text are nearly 200 color illustrations of the mathematics and theoretical results; many were created using the Dynamo software suite, which is freely available on the author's Web site. Readers are encouraged to use Dynamo to run quick numerical experiments and to create publishable figures for their own research.