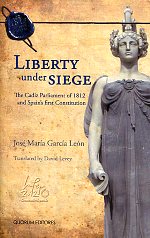 This book, entitled Liberty under siege, derived from of a series of articles which were originally published in Diario de Cádiz. They have been extended and duly revised to form forty chapters which present different and varied aspects of the momentous events which took place within the Cortes as well as outside its walls. It covers questions such as the abolition of the Inquisition, the freedom of the press, the role of Freemasonry, the debate on slavery. There are also descriptions of several leading and sometimes controversial figures such as the Duke of Wellington, the Priest from Algeciras, Luis Felipe de Orleáns, Agustin de Argüelles, and other colourful ones such as the quixotic John Downie. The idea of this book is to offer a new perspective on the Cortes de Cádiz. Factual and informative but using straightforward language which, hopefully, will make it easy and enjoyable to read.
José María García León, PhD in History, is a teacher, writer, columnist and conference speaker. He has published several books about Cádiz in the nineteenth century: La Milicia Nacional en Cádiz, La Masonería Gaditana. Desde sus orígenes hasta 1813 and El Trienio Liberal en Cádiz. These three works, dealing with the National Militia in Cádiz, the Freemasons, and the ´Liberal Triennium´ period respectively, from an unintentional trilogy about the birth of liberalism in Cádiz. Lately, the Cortes de Cádiz has become the author´s principal area of research, and he has recently published a book in two volumes entitled Los diputados doceañistas in which he analyses the lives and political work of the 305 parliamentary members who took part in that Assembly. He has also published numerous articles in specialist journals as well as in the press. A member of la Cátedra Adolfo de Castro and el Instituto de Estudios del Campo de Gibraltar, he is Secretary of the Blas Infante foundation and was formerly President of el Ateneo de Cádiz. In 2000 he won el Premio 1812, a prize awarded by el Club Liberal 1812. 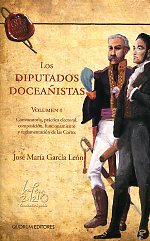