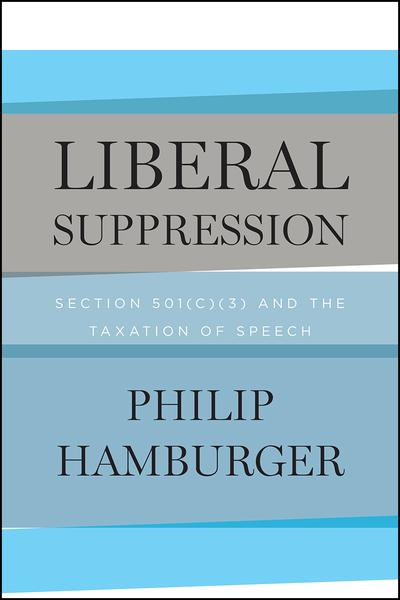 Liberal suppression
Section 501(c)(3) and the taxation of speech

In the course of exempting religious, educational, and charitable organizations from federal income tax, section 501(c)(3) of the Internal Revenue Code requires them to refrain from campaign speech and much speech to influence legislation. These speech restrictions have seemed merely technical adjustments, which prevent the political use of a tax subsidy. But the cultural and legal realities are more disturbing.

Tracing the history of American liberalism, including theological liberalism and its expression in nativism, Hamburger shows the centrality of turbulent popular anxieties about the Catholic Church and other potentially orthodox institutions. He argues persuasively that such theopolitical fears about the political speech of churches and related organizations underlay the adoption, in 1934 and 1954, of section 501(c)(3)'s speech limits. He thereby shows that the speech restrictions have been part of a broad majority assault on minority rights and that they are grossly unconstitutional.

Along the way, Hamburger explores the role of the Ku Klux Klan and other nativist organizations, the development of American theology, and the cultural foundations of liberal "democratic" political theory. He also traces important legal developments such as the specialization of speech rights and the use of law to homogenize beliefs. Ultimately, he examines a wide range of contemporary speech restrictions and the growing shallowness of public life in America.
His account is an unflinching look at the complex history of American liberalism and at the implications for speech, the diversity of belief, and the nation's future.