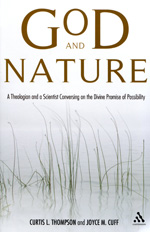 The current religion and science dialogue begs for greater clarity on the relation of God to nature. In God and Nature two scholars who embrace contemporary insights from science and religion explore the complexities of this debate. As the narrative unfolds, classical and contemporary thinkers are engaged as discussion partners in articulating a philosophical theology of nature. Conceptual pairs, in which two concepts play off of each other, provide the structure for each of the seven chapters, with usually the first concept being more scientific in character and the second more religious in tone. These pairs of concepts—from chronology and creation to creativity and creator—help to thematize and structure the progressing narrative. Within each chapter the two concepts are first investigated independently, then interdependently, and finally in relation to the divine. At the story's completion nature has emerged as alive with possibility that is as alluring as the actuality it evokes. Envisioned is a divine Creator who works in and through the possibility of creation to lure it into fuller manifestations via creative transformation.