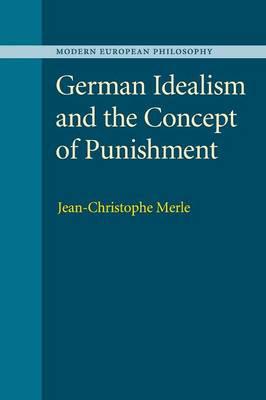 German idealism and the concept of punishment

Against the background of early modernism - a period that justified punishment by general deterrence - Kant is usually thought to represent a radical turn towards retributivism. For Kant, and later for Fichte and Hegel, a just punishment respects the humanity inherent in the criminal, and serves no external ends - it is instituted only because the criminal deserves it. In this original study, Jean-Christophe Merle uses close analysis of texts to show that these philosophers did not in fact hold a retributivist position, or even a mixed position; instead he traces in their work the gradual emergence of views in favour of deterrence and resocialisation. He also examines Nietzsche's view that morality rests on the rejection of retribution. His final chapter offers a challenge to the retributivist position, and a defence of resocialisation, in the context of current legal theory and practice concerning the punishment of crimes against humanity.