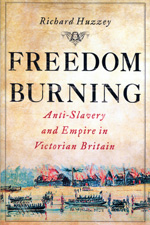 After Britain abolished slavery throughout most of its empire in 1834, Victorians adopted a creed of "anti-slavery" as a vital part of their national identity and sense of moral superiority to other civilizations. The British government used diplomacy, pressure, and violence to suppress the slave trade, while the Royal Navy enforced abolition worldwide and an anxious public debated the true responsibilities of an anti-slavery nation. This crusade was far from altruistic or compassionate, but Richard Huzzey argues that it forged national debates and political culture long after the famous abolitionist campaigns of William Wilberforce and Thomas Clarkson had faded into memory. These anti-slavery passions shaped racist and imperialist prejudices, new forms of coerced labor, and the expansion of colonial possessions.

In a sweeping narrative that spans the globe, Freedom Burning explores the intersection of philanthropic, imperial, and economic interests that underlay Britain's anti-slavery zeal- from London to Liberia, the Sudan to South Africa, Canada to the Caribbean, and the British East India Company to the Confederate States of America. Through careful attention to popular culture, official records, and private papers, Huzzey rewrites the history of the British Empire and a century-long effort to end the global trade in human lives.