France divided
the french and the Civil War in Spain

This book sets out to analyse the schism in French public opinion during the Spanish Civil War that was to end in the tragic collapse of French national unity. It makes no claim to being a new history of the conflict, or even of the international events surrounding it. It touches only cursorily upon the events in Spain proper. It considers only tangentially French public opinion in regard to the two Spains. Instead, it examines how the French people viewed their position in the international imbroglio swirling around the Spanish question, and how news was manipulated as never before. And since opinion polls were inexistent and radio commentary had little influence, almost the only means of gauging public opinion is the press. Mainstream historical fact is presented merely as the skeleton on which French press reportage is grafted. Included in the historical material is the author's research in the archives of all five of the French departements bordering on Spain. Within the press, four areas predominate: editorial opinion; propaganda; French correspondents in Spain; and, collateral events in France (frontier incidents, arms supplies, foreign volunteers, and espionage activities). The work is divided into two parts, the chronological hiatus coming in December 1936. This division is explained by the policy formulated by the democracies that went through no appreciable change; a policy sufficiently strong, perhaps, to deter the Axis powers from all-out intervention in Spain, but weak enough to allow them to pursue with impunity a victory by attrition. The periodic opening and closing of the French frontier played no decisive part in the outcome, since French aid to the Spanish Republic never came close to what the Axis provided the Nationalists. The book ends with the agony of the Republican exodus. Published in association with the Canada Blanch Centre for Contemporary Spanish Studies.

Franco and the axis stigma 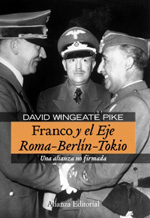