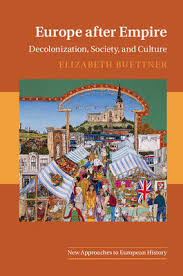 Europe after Empire is a pioneering comparative history of European decolonization from the formal ending of empires to the postcolonial European present. Elizabeth Buettner charts the long-term development of post-war decolonization processes as well as the histories of inward and return migration from former empires which followed. She shows that not only were former colonies remade as a result of the path to decolonization: so too was Western Europe, with imperial traces scattered throughout popular and elite cultures, consumer goods, religious life, political formations, and ideological terrains. People were also inwardly mobile, including not simply Europeans returning 'home' but Asians, Africans, West Indians, and others who made their way to Europe to forge new lives. The result is a Europe fundamentally transformed by multicultural diversity and cultural hybridity and by the destabilization of assumptions about race, culture, and the meanings of place, and where imperial legacies and memories live on.