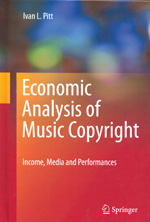 Chris Anderson's initial 'Long Tail' analysis was released in 2004 just as the wave of mergers and acquisitions was sweeping the music publishing and radio industries. Music industry executives began looking for Anderson's 'Long Tail' effect and with it the implied redistribution of royalty income from popular songs to long dormant and forgotten works in their catalogs. These music publishers had hoped to further maximize the value of their copyright assets (lyrics and melody) in their existing music catalogs as the sale of compact disks diminished, and consumers switched their purchasing and listening habits to new digital formats in music technology such as the iPod. This book deals with the measurement of skewness, heavy tails and asymmetry in performance royalty income data in the music industry, an area that has received very little academic attention for various reasons. For example, the pay packages, including signing bonuses, of some 'superstars' in the sports world are often announced when they join a team. In the art world, the value of an artist's work is sometimes revealed when the work is sold at auction. The main reason it is difficult to study art and culture from a royalty income perspective is that most of the income data at the individual level is often proprietary, and generally not made publicly available for economic analysis. As a Senior Economist for the American Society of Composers, Authors, and Publishers (ASCAP) using both internal and licensed external proprietary data, the author found that the so-called 'superstar effects' are still present in performance royalty income. Success is still concentrated on a relatively few copyright holders or members who can be grouped into 'heavy tails' of the empirical income distribution in a departure from Anderson's 'long tail' analysis. This book is divided into two parts. The first part is a general introduction to the many supply and demand economic factors that are related to music performance ro