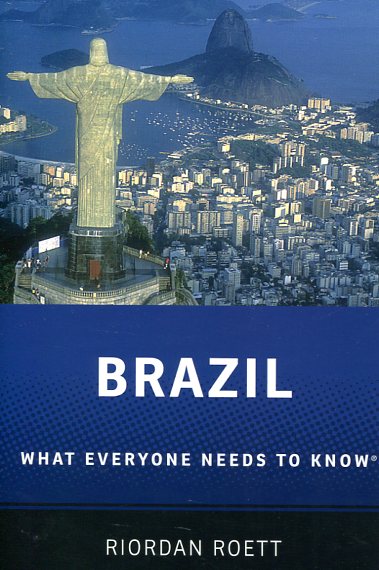 Brazil
what everyone needs to know

Brazil is one of the most important but puzzling countries in the world. A nation of 200 million people, it has vast natural resource reserves, rich cultural traditions, a middle class undergoing explosive growth, and social welfare policies that are models for much of the world ('la bolsa familia,' which provides a guaranteed income to poor families). And, after decades of authoritarian rule, it is a stable democracy. Yet it is beset by problems that no other advanced economy suffers from: staggeringly high crime rates, sky-high inequality levels, and endemic political corruption. Emblematic of these two sides of Brazil is the selection of Rio as site of both the next Summer Olympics and the next World Cup. While the choice of Rio for these events points to Brazil's expanding presence on the world stage, so far the construction and planning for the events have been disastrous, threatening to deeply embarrass the nation. In Brazil: What Everyone Needs to Know, Riordan Roett, an eminent scholar of Brazil and Latin America, will provide a rich overview of Brazil, covering Brazilian society, politics, culture, and the economy. The book begins with a series of chapters on Brazilian history, beginning with the pre-colonial period and moving on, in succession, to the long era of Portuguese rule, the birth of independent Brazil, the emergence of modern Brazil in the 1930s, the era of the dictators, and - finally - to the democratic regime that came into being in the 1980s. Throughout the book, Roett will focus sharply on the fault lines - racial, economic, political, and cultural - that have plagued Brazil from its beginnings to this day. As the 2016 World Cup and Summer Olympics approach, interest in Brazil is sure to rise. Roett's synthesis will provide interested readers with an accessible, authoritative overview of this troubled yet fascinating giant.