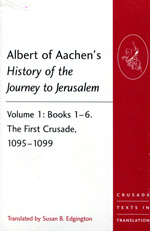 Albert of Aaechen's History of the Journey to Jerusalem

Albert of Aachen's History of the Journey to Jerusalem presents the story of the First Crusade (1095-1099) and the early history of the crusader states (1099-1119). Volume 1, The First Crusade, is a long and richly detailed account of events well known from the reports of participants, such as Fulcher of Chartres, Raymond of Aguilers and the anonymous author of the Gesta Francorum, but told from a strikingly different perspective. Albert did not go on crusade himself, but gathered reports and anecdotes from those who did, and wove them into narrative that foregrounds the activities of Peter the Hermit, Godfrey of Bouillon, Baldwin of Boulogne, and their followers. His History therefore offers a counter-balance, and sometimes a corrective, to the established view. Volume 2, The Early History of the Latin States, provides a surprising level of detail about the reign of King Baldwin I (1100-1119), especially its earlier years and the crusading expeditions of 1101. It offers much more detail than the only other substantial Latin account of the same events, by Fulcher of Chartres, and where it can be tested against other narratives, including Arabic and Greek sources, it proves to be worthy of both trust and respect. Susan B. Edgington's English translation has been widely praised, following its first publication in the Oxford Medieval Texts series, and is here presented as a two-volume set, with a new introduction and updated notes and bibliography.

Translated by Susan B. Edgington.