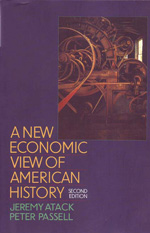 Even though it's no longer very new, the "New Economic History" remains vital. Its hallmark is the application of economic theory and statistical methods to problems in history. New sources of data and advances in economic theory continually offer the opportunity for fresh looks at old and new questions. Since the initial publication of A New Economic View of American History in 1979, the field and its practitioners have matured considerably, and a torrent of new research has been performed. New chapters on long-run growth, the market for labor, population distribution and growth, financial markets, the changing structure of American industry, and the Great Depression have been added. Thus, Jeremy Atack and Peter Passell have filled the gaps that existed in the first edition, fashioning a true survey of America's economic history from colonial times through the New Deal. Did mercantilism cause the American Revolution? Was slavery profitable? What contribution did migration and immigration make to the economic growth of the nation? How effective has government intervention been in the redistribution of income? Do we know enough about the causes of the Great Depression to prevent another one? Did the New Deal save American capitalism or undermine it? What is the record on tariff policy? These are just a few of the centrally important questions in American history that are illuminated in this book.

The origin and development of financial markets and institutions