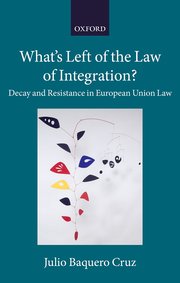 What's left of the law of integration?
decay and resistance in European Union Law

Born from the ashes of the Second World War as one of the most ambitious and successful parts of the plan for the reconstruction of Western Europe, European integration has been immersed in a deep economic and institutional crisis for more than a decade. This difficult situation is also threatening to erode one of its most original and valuable elements: the establishment of a supranational rule of law among the Member States of the European Union that provides a solid framework for their peaceful, ordered, and fair relations.

This book, which is based on the general course given at the Academy of European Law in Florence in July 2015, puts the innovative initial choices made by the drafters of the Treaties and by the Court of Justice of the Union in their proper historical perspective, understanding Union law as a tool of civilisation. Its current decline is explained as a consequence of the waning of the initial impetus behind integration, of the growing complexity and challenges of the Union system, and of the ambivalent attitude of the Member States regarding their common creation.

These themes are explored focusing on a number of fundamental structural issues: the principle of primacy, the national limits to it and the theory of constitutional pluralism; the state of health of the preliminary rulings procedure; Union citizenship, equality and human dignity; the scope of the Charter of Fundamental Rights and the standard of protection of those rights; and the rigidity and fragmentation of the Union system in connection with the increasing use of international law as a softer alternative to Union law.

In all these areas, the book presents a fascinating story of decay and resistance, a story that is unfolding at present, and whose fate is closely linked to the future political shape of Europe.

1: Some Things Pierre Pescatore Told Me
2: Law after Auschwitz
3: Against Constitutional Pluralism
4: The Preliminary Rulings Procedure: Cornerstone or Broken Atlas?
5: Partial Eclipse of Union Citizenship: From Grzelczyk to Dano
6: Fundamental Rights and the Integrity of Union Law
7: Rigidity, Fragmentation and the Allure of International Law
8: Concluding Thoughts