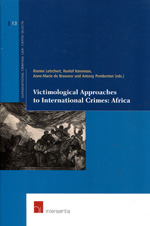 The last decade of the 20th century saw the revival of global efforts aimed at tackling some of the most atrocious crimes of concern to mankind. Legal initiatives at international, regional, and national levels took shape to prevent the commission of genocide, war crimes, and crimes against humanity (international crimes), as well as to punish those most responsible for them. These commendable legal developments had considerable shortcomings in dealing with victims of international crimes. Victims' suffering and needs were hardly considered a priority. The establishment of the International Criminal Court changed this to some extent, providing a more comprehensive framework towards addressing victims' needs through a criminal justice approach. The peculiar situation of victims of international crimes calls for a holistic approach that links various relevant fields, such as traumatic stress, the social psychology of group conflict and resolution, and the psychology and sociology of legal processes. The latter is important in its own right, but also for the ongoing efforts in transitional and international criminal justice, as it can provide the empirical underpinning of the choices and developments in these fields. Transcending the disciplinary divisions in the study of victims of international crimes is the main focus of this volume, which contributes to developing victimological approaches to international crimes. Focusing on the African continent, scholars from different disciplines review the similarities and differences between victims of ordinary crimes and those of genocide, war crimes, and crimes against humanity. As victimological research has mainly focused on the former crimes, the book provides a much-needed and comprehensive overview of the intricacies of victimization by international crimes. This endeavor transcends academic interest, as an approach of this kind is essential to mend societies ravaged by genocide, war crimes, and/or crimes against humanity.