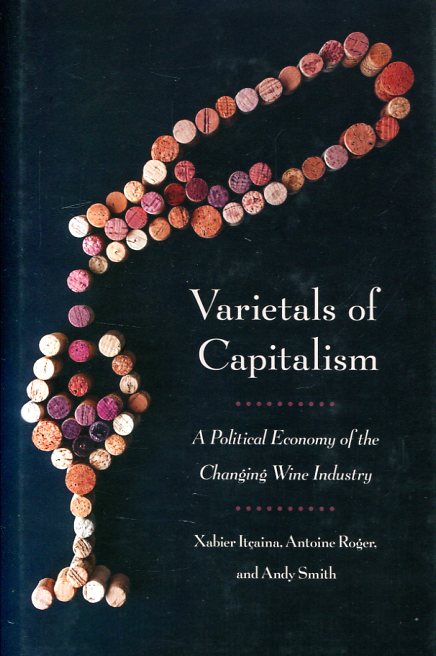 Varietals of capitalism
a political economy of the changing wine industry

Varietals of Capitalism shows that politics is an omnipresent part of the economics of wine and of economic activity in general. Based on a four-year research project encompassing fieldwork in France, Spain, Italy, and Romania, Xabier Itçaina, Antoine Roger, and Andy Smith examine the causes and effects of a radical reform adopted at the EU level in 2008. Regulatory change politically transformed the rationale of EU support to the wine industry, from shaping the supply side to encouraging producers to adapt to the demands of a supposedly "new consumer."
To explain the adoption and impact of the reform, the authors develop an analytical framework to capture the actors—their perceptions, preferences, and interdependencies—within an industry crisscrossed by institutions located at the global, European, national, and local scales. This framework combines concepts and lessons from historical institutionalism and regulationist economics, Bourdieu's field theory, and the sociology of public policymaking. The authors reject accounts that attribute policy change simply to material determinants and “the invisible hand of the market.” They emphasize the crucial importance of institutions within sectors of the economy, and propose ways to bolster constructivist approaches to political economy by linking industrial change to scientific and bureaucratic balances of power. This book’s novel focus on different levels of institutional impact should prove influential in the study of the politics of industry, and more broadly within the comparative analysis of capitalism.