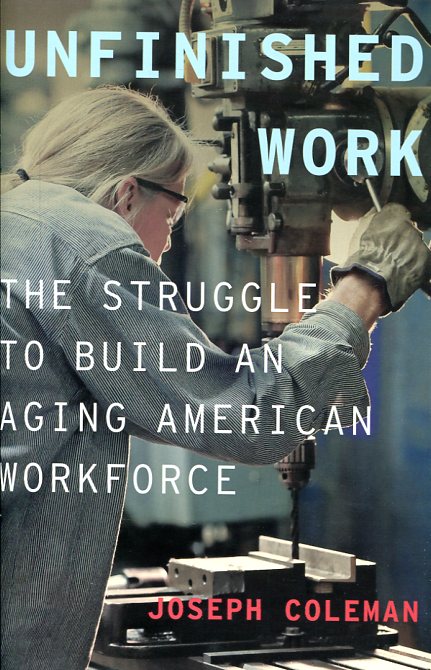 Unfinished work
the struggle to build an aging american workforce

The forces driving the first decades of the 21st century--globalization, technology, and unprecedented wealth mixed with jarring economic instability--are pushing the day of retirement later and later in life. The era of the aging worker is here. From the rice paddies of Japan to the heart of the American rust-belt, veteran international correspondent Joseph Coleman takes readers inside the lives of aging workers, exploring the factories, offices, and fields where they toil and the societies in which they live, giving the reader a front-row seat to the global older worker revolution. Profiles of individuals bring to life Coleman's exploration of how countries around the world are dealing with their aging workforces and his advice for how societies can best benefit from and assist their increasingly older population. Readers will come to know Michel Wattree, a retired French trucker who has found a second life as an elementary school bus driver and still nurses dreams of driving America's storied Route 66. The aging crew of Japan's Yamashita Kogyosho, where for half a century they have crafted the world's fastest trains with their bare hands and hammers, exemplifies Japan's adaptive employment strategies that have helped the country deal with one of the oldest demographic compositions in the world. In the United States, Rita Hall is an unemployed hospital worker from Akron, Ohio who hopes that a job training program will save her from spending the rest of her golden years in poverty--a fear shared by many who will far outlive their retirement savings. Amidst the stories of how these works are working hard to adapt, Unfinished Work probes the struggles of companies either unable or unwilling to accommodate the aging of their workforces and the quandaries of governments and policymakers eager to control pension pay-outs to retiring boomers, yet unsure how to keep them on the job. What emerges is a compassionate but clear-eyed portrait of a world in the midst of a slow-motion aging revolution that will have vast consequences for present and coming generations.