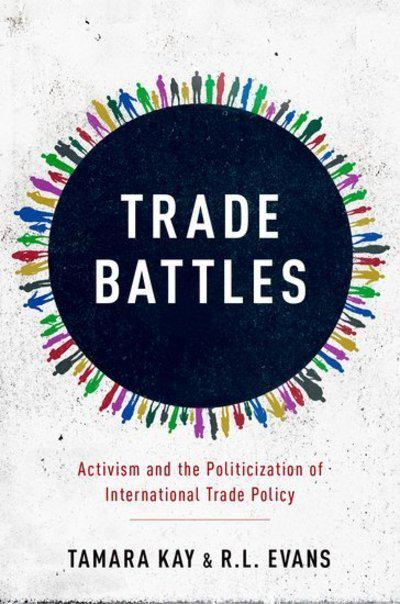 Trade battles
activism and the politicization of international trade policy

How did activists create a dynamic broad-based movement during NAFTA negotiations that politicized trade, making it a contentious issue for the first time in history? And how did their NAFTA mobilization influence trade policy and set the stage for future battles over trade? Trade Battles draws on hundreds of in-depth interviews with Mexican, Canadian, and U.S. trade negotiators, labor and environmental activists, and government officials, and an extensive analysis of archival materials to understand the role of civil society in shaping state policy. Trade Battles shows how activists politicized trade policy by creating a new set of institutionalized and disruptive strategies around trade that leveraged broader cleavages across state and nonstate arenas. Activists exploited these leverage points by mobilizing across them, which enabled them not only to politicize trade policy with legislators and trade policy officials and among the public, but also to influence the content of the agreement itself. So powerful was activists' pushback against NAFTA that future administrations closed many state institutional channels in order to thwart public opposition, curtailing public access, participation and input. This forced activists to try to kill subsequent trade agreements whole cloth rather than improve them, as they did during the NAFTA struggle. Trade Battles reveals that the NAFTA battle was less about trade policy than the role of democratic state institutions in policymaking. By exposing the linkages between institutional opportunities and democratic practices, it reveals how critical state institutions are for activists' efforts to shape not only trade policy, but a number of international policies from climate change to migration. When the state closes institutions, it effectively severs policymaking from democratic intervention.