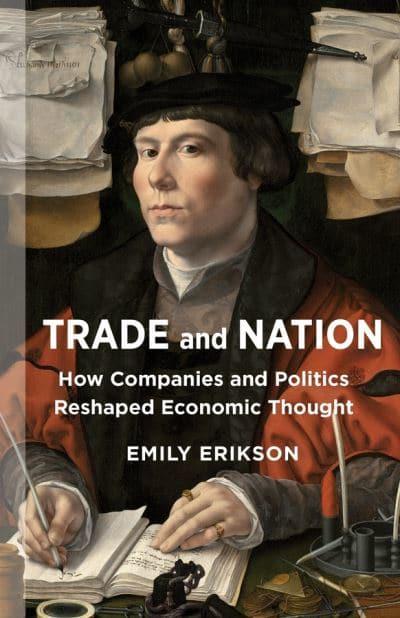 Trade and Nation
how companies and politics reshaped economic thought

In the seventeenth century, English economic theorists lost interest in the moral status of exchange and became increasingly concerned with the roots of national prosperity. This shift marked the origins of classical political economy and provided the foundation for the contemporary discipline of economics. The seventeenth-century revolution in economic thought fundamentally reshaped the way economic processes have been interpreted and understood. In Trade and Nation, Emily Erikson brings together historical, comparative, and computational methods to explain the institutional forces that brought about this transformation.

Erikson pinpoints how the rise of the company form in confluence with the political marginalization of English merchants created an opening for public argumentation over economic matters. Independent merchants, who were excluded from state institutions and vast areas of trade, confronted the power and influence of crown-endorsed chartered companies. Their distance from the halls of government drove them to take their case to the public sphere. The number of merchant-authored economic texts rose as members of this class sought to show that their preferred policies would contribute to the benefit of the state and commonwealth. In doing so, they created and disseminated a new moral framework of growth, prosperity, and wealth for evaluating economic behavior. By using computational methods to document these processes, Trade and Nation provides both compelling evidence and a prototype for how methodological innovations can help to provide new insights into large-scale social processes.

Between monopoly and free trade