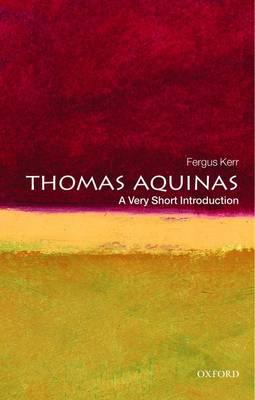 Thomas Aquinas, an Italian Catholic priest in the early thirteeth century, is considered to be one of the great Christian thinkers who had, and who still has, a profound influence on Western thought. He was a controversial figure who was exposed and engaged in conflict. This Very Short Introduction looks at Aquinas in a historical context, and explores the Church and culture into which Aquinas was born. It considers Aquinas as philosopher, and looks at the relationship between philosophy and religion in the thirteenth century. Fergus Kerr, in this engaging and informative introduction, will make The Summa Theologiae, Aquinas's greatest single work, accessible to new readers. It will also reflect on the importance of Thomas Aquinas in modern debates and asks why Aquinas matters now. ABOUT THE SERIES: The Very Short Introductions series from Oxford University Press contains hundreds of titles in almost every subject area. These pocket-sized books are the perfect way to get ahead in a new subject quickly. Our expert authors combine facts, analysis, perspective, new ideas, and enthusiasm to make interesting and challenging topics highly readable.