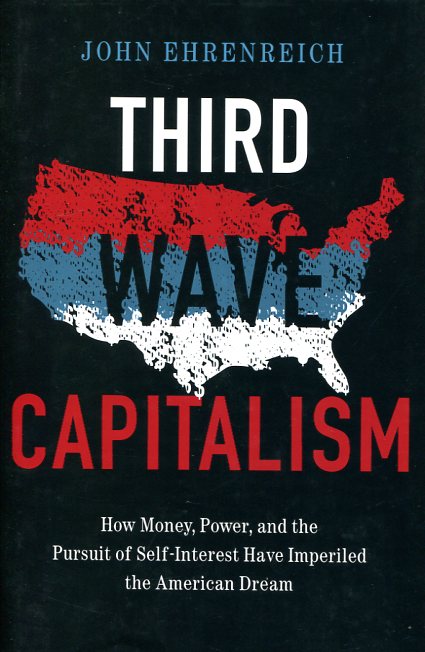 Third wave capitalism
how money, power, and the pursuit of self-interest have imperiled the American Dream

In Third Wave Capitalism, John Ehrenreich documents the emergence of a new stage in the history of American capitalism. Just as the industrial capitalism of the nineteenth century gave way to corporate capitalism in the twentieth, recent decades have witnessed corporate capitalism evolving into a new phase, which Ehrenreich calls Third Wave Capitalism. Third Wave Capitalism is marked by apparent contradictions: Rapid growth in productivity and lagging wages; fabulous wealth for the 1 percent and the persistence of high levels of poverty; increases in the standard of living and increases in mental illness, personal misery, and political rage; the apotheosis of the individual and the deterioration of democracy; increases in life expectancy and out-of-control medical costs; an African American president and the incarceration of a large percentage of the black population.Ehrenreich asserts that these phenomena are evidence that a virulent, individualist, winner-take-all ideology and a virtual fusion of government and business have subverted the American dream. Greed and economic inequality reinforce the sense that each of us is on our own. The result is widespread lack of faith in collective responses to our common problems. The collapse of any organized opposition to business demands makes political solutions ever more difficult to imagine. Ehrenreich traces the impact of these changes on American health care, school reform, income distribution, racial inequities, and personal emotional distress. Not simply a lament, Ehrenreich s book seeks clues for breaking out of our current stalemate and proposes a strategy to create a new narrative in which change becomes possible.