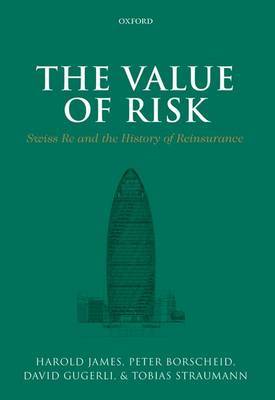 The value of risk
Swiss Re and the history of reinsurance

Reinsurance is an invisible service industry which enables insurance companies to insure more risks and to make better use of their resources. Until recently, reinsurers were only known to a small minority outside the insurance community. Major disasters, especially those caused by natural catastrophes, have increasingly brought the industry into the spotlight. Yet what is perceived today by a wider public still only represents a fraction of the industry, and the mechanisms of reinsurance to deal with global risk exposure are virtually unknown. The Value of Risk provides an overview of how today's reinsurance industry developed. It investigates for the first time the role of reinsurers in a changing risk, economic, and market environment. Harold James explains the fundamental principles of insuring and outlines the evolution of the industry in his introductory essay. In Part I, Peter Borscheid describes in detail the global spread of modern insurance, which emerged in the late eighteenth century amidst ideas of rationalism which attempted to quantify risk in monetary terms, the setbacks it encountered, and how the market environment changed over time. Professional reinsurance emerged with the rise in insured risks in the industrialising mid-nineteenth century. By the time the San Francisco Earthquake happened in 1906 the reinsurance industry had become well established and showed a remarkable ability to deal collectively with the catastrophe. David Gugerli describes in Part II how the industry as a whole dealt with such challenges but also the numerous exposures to a changing risk landscape. Against this background, in Part III Tobias Straumann examines the history of the Swiss Reinsurance Company, founded in 1863, providing a fascinating example of how professional risk taking was developed over the last 150 years.