For over thirty years David S. Landes#s The Unbound Prometheus has offered an unrivalled history of industrial revolution and economic development in Europe. Now, in this new edition, the author reframes and reasserts his original arguments in the light of current debates about globalisation and comparative economic growth. The book begins with a classic account of the characteristics, progress, and political, economic and social implications of the Industrial Revolution in Britain, France and Germany. Professor Landes here raises the much- debated question: why was Europe the first to industrialise? He then charts the economic history of the twentieth-century: the effect of the First World War in accelerating the dissolution of the old international economy; the economic crisis of 1929#32; Europe#s recovery and unprecedented economic growth following the Second World War. He concludes that only by continuous industrial revolution can Europe and the world sustain itself in the years ahead. INDICE Preface to the new edition; Preface to the original edition; 1. Introduction; 2. The industrial revolution in Britain; 3. Continental emulation; 4. Closing the gap; 5. Short breath and second wind; 6. The interwar years; 7. Reconstruction and growth since 1945; 8. Conclusion; 9. Epilogue; Index. 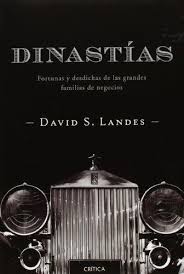 The invention of enterprise