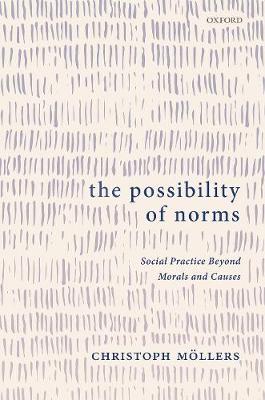 The possibility of norms
social practice beyond morals and causes

What defines the social practices we currently call norms? They make theft forbidden, eating with a fork advisable, and paintings beautiful. Norms are commonly thought of as moral justifications for doing one thing and not doing another. They are also described in terms of their outcomes or effects, serving as mere causal explanations.

The Possibility of Norms proposes a broader view of how norms function, how they are articulated, and how they are realized. It may be asking too much if we expect norms to be effective or morally right. Many norms are simply ineffective and many are at most ineffectively justifiable. Drawing upon a rich array of texts - from law and jurisprudence to philosophy, aesthetics, and the social sciences - Möllers argues for conceiving of social norms as positively marked possibilities. Positively marking a possibility indicates that it should be realized. Normativity thus hinges on judging the world from a distance and acknowledging the possibility of divergent states of the world. Hence, it is no longer theoretically problematic that there are morally unjustified norms, nor that norms can be broken. On the contrary, allowing for breaches may be an important feature of normativity.

Introduction: On Norms - no more, no less
I Problems
1:Good Reasons? Deficits of philosophical conceptions of normativity
2:Conceptual baggage of empirical research
Intermezzo: False pairs of alternatives for describing norms
II Concepts
3:The Possibility of Norms: a conceptual model
Intermezzo: Does the aesthetics of art fall in the realm of the normative?
4:The reality of norms: the operating conditions of the normative
III Gains
5:Meaning and function of social norms
6:Perspectives in research