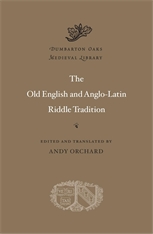 What offers over seven hundred witty enigmas in several languages? Answer: The Old English and Anglo-Latin Riddle Tradition. Riddles, wordplay, and inscrutable utterances have been at the heart of Western literature for many centuries. Often brief and always delightful, medieval riddles provide insights into the extraordinary and the everyday, connecting the learned and the ribald, the lay and the devout, and the familiar and the imported. Many solutions involve domestic life, including “butter churn” and “chickens.” Others like “the harrowing of hell” or “the Pleiades” appeal to an educated elite. Still others, like “the one-eyed seller of garlic,” are too absurd to solve: that is part of the game. Riddles are not simply lighthearted amusement. They invite philosophical questions about language and knowledge.

Most riddles in this volume are translated from Old English and Latin, but it also includes some from Old Norse–Icelandic. The Old English and Anglo-Latin Riddle Tradition assembles, for the first time ever, an astonishing array of riddles composed before 1200 CE that continue to entertain and puzzle.

Introduction
Manuscript Contexts
Sources and Analogues
Use of Titles
Shared Themes across the Collections
Style
This Text and Translation
Acknowledgments
Notes
The Anglo-Latin Tradition
Aldhelm
Bede
Tatwine
Hwætberht, The Riddles of Eusebius
Boniface
Alcuin
The Lorsch Riddles
The Abingdon Riddle
The High-Minded Library
The Old English Tradition
The Franks Casket Riddle
The Leiden Riddle
The Exeter Book Riddles
The Old English Rune Poem
The Riddles of Solomon and Saturn II
The Old English Prose Riddle
Sources and Analogues of the Tradition
Symphosius
The Bern Riddles
The Verses of a Certain Irishman on the Alphabet
The Old Icelandic Rune Poem
The Riddles of Gestumblindi
Various Riddles
Abbreviations
Note on the Texts
Notes to the Texts
Notes to the Translations
Bibliography
Index of Solutions