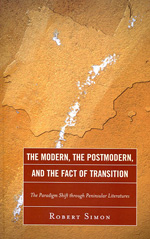 The modern, the postmodern and the fact of transition
the paradigm shift through peninsular literatures

The Modern, the Postmodern, and the Fact of Transition defines the basic parameters of Thomas Kuhn's paradigm shift theory as applied to the evolution of Spanish and Portuguese societies from the 1950s to the end of the twentieth century, from the perspective of a similar shift in poetry. Kuhn's theory states that a paradigm shift must happen in three phases: the crisis phase, the transition phase, and the adoption phase. The paradigm in question is the "postmodern" social (and thus, literary) paradigm made popular in criticism and social discourse during the 1990s. This shift in the Iberian context, therefore, will be analyzed in three phases: the first, from 1955 to 1975; and the latter two, from 1975 to 2000. This approximation provides a template for a vision of Iberian societies' evolution as ongoing and fraught with contradictory notions of centralization and deconstruction as simultaneous and somehow complimentary.