The meaning of theism

Leading philosophers reflect on what belief in God, or its absence, means for the subject - what difference it makes to the flow and perceived significance of someone's life. The different perspectives of the authors, Christian, Buddhist, Jewish, atheist and agnostic make for an unusually stimulating juxtaposition of views. Contributors include Sir Anthony Kenny on the idea of 'devout agnosticism', Alvin Plantinga on the compatibility of science and religion, John Haldane on the human desire for God, Richard Norman on atheistic interpretations of religious experience, David Benatar on the value of religious observance irrespective of belief, and John Cottingham on the role of emotions and habits of virtue in the adoption of a religious outlook. 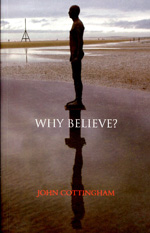