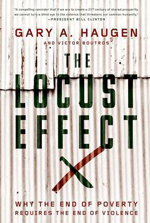 World poverty is both an intractable and ever-mutable problem. It has afflicted humanity since the earliest times, but its basic features - aside from the constant, want - have evolved as history has moved from epoch to epoch. Today, there is broad recognition that a significant segment of the global population (the 'bottom billion,' to use Paul Collier's term) is impoverished despite the globalization of the world economy. Two questions - why destitution is so persistent despite massive global economic growth and what can be done about it - have animated debates among development scholars and poverty researchers for decades. Those who concentrate on the first question focus on the failure of anti-poverty efforts and typically stress why particular solutions on offer have not worked. Those addressing the second question have focused on either improving material conditions or on creating institutional frameworks (economic, social and political) that will allow the masses in poor countries to escape from poverty. Yet until now, virtually no one has addressed in a substantial way the most basic precondition for alleviating poverty: human safety. In most poverty-stricken areas of the world, violence is endemic. Whether it is generated by criminals who operate with complete abandon or by the state itself via predatory police forces, violence and threat of it have locked hundreds of millions of people into poverty. Gary Haugen and Victor Boutros's The Locust Effect focuses on the central role of violence in perpetuating poverty, and shows that if any headway is to be made, this issue has to become a top priority for policymakers. Simply put, if people aren't safe, nothing else matters. Shipping grain to the poor, helping them vote, or assisting their efforts to start a farm is irrelevant. Whatever material improvements we provide will simply wash away in the face of the corrupt police forces, out-of-control, armies, private militias, organized criminals, and - not least - failed justice systems that plague poor countries. Throughout, the book will feature real-world stories ranging from Thailand to Bolivia to India to Nigeria that vividly depict how violence undercuts antipoverty efforts. While they argue that this violence is the fundamental issue facing the antipoverty movement, they do not merely identify the problem. They also draw from their experience running the International Justice Mission to show that ground-up efforts to reform legal and public justice systems can generate real, positive results. Sweeping in geographical scope and filled with unforgettable stories of individuals trapped within the mutually reinforcing cycle of poverty and violence, The Locust Effect will force us to rethink everything we know about the causes of poverty and why it is so difficult to root out.