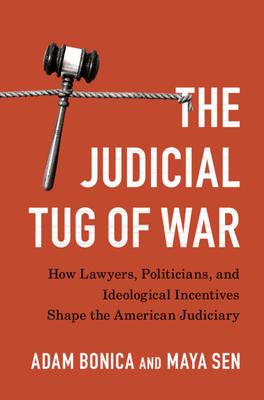 The judicial tug of war
how lawyers, politicians, and ideological incentives shape the American judiciary

Why have conservatives decried 'activist judges'? And why have liberals - and America's powerful legal establishment - emphasized qualifications and experience over ideology? This transformative text tackles these questions with a new framework for thinking about the nation's courts, 'the judicial tug of war', which not only explains current political clashes over America's courts, but also powerfully predicts the composition of courts moving forward. As the text demonstrates through novel quantitative analyses, a greater ideological rift between politicians and legal elites leads politicians to adopt measures that put ideology and politics front and center - for example, judicial elections. On the other hand, ideological closeness between politicians and the legal establishment leads legal elites to have significant influence on the selection of judges. Ultimately, the judicial tug of war makes one point clear: for good or bad, politics are critical to how judges are selected and whose interests they ultimately represent.

1. Introduction
Part I. The Legal Profession and the 'Captured Judiciary':
2. The 'American Aristocracy'
3. The Bar, Self Regulation, and Judicial Capture
Part II. Political Actors and the Incentive to Politicize:
4. Politicians, their Interests, and the Judicial Tug of War
5. Politicization in the Federal Courts
6. Politicization in the States
Part III. Ramifications of the Judicial Tug of War:
7. Politics of Judicial Reform
8. Polarization and Conflict
9. Conclusion