The irrationals
a story of the numbers tou can't count on

The ancient Greeks discovered them, but it wasn't until the nineteenth century that irrational numbers were properly understood and rigorously defined, and even today not all their mysteries have been revealed. In The Irrationals, the first popular and comprehensive book on the subject, Julian Havil tells the story of irrational numbers and the mathematicians who have tackled their challenges, from antiquity to the twenty-first century. Along the way, he explains why irrational numbers are surprisingly difficult to define--and why so many questions still surround them. That definition seems so simple: they are numbers that cannot be expressed as a ratio of two integers, or that have decimal expansions that are neither infinite nor recurring. But, as The Irrationals shows, these are the real "complex" numbers, and they have an equally complex and intriguing history, from Euclid's famous proof that the square root of 2 is irrational to Roger Apry's proof of the irrationality of a number called Zeta(3), one of the greatest results of the twentieth century. In between, Havil explains other important results, such as the irrationality of e and pi. He also discusses the distinction between "ordinary" irrationals and transcendentals, as well as the appealing question of whether the decimal expansion of irrationals is "random". Fascinating and illuminating, this is a book for everyone who loves math and the history behind it. 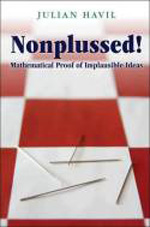