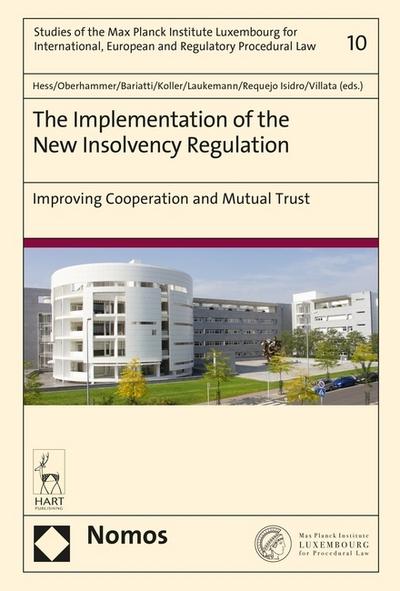 The study is a result of a collaborative research project addressing "The Implementation of the New Insolvency Regulation - Improving Cooperation and Mutual Trust". The project was undertaken by the Max Planck Institute Luxembourg for Procedural Law, the University of Vienna and the University of Milan, and co-funded by the European Union as part of the Commission's Action Grants 2013 for Civil Justice. The focus of the study concerns specific issues of cross-border insolvencies under the recast of the Insolvency Regulation which already has been prepared by a large part of the contributing authors in the Heidelberg-Vienna-Luxembourg Report. The study is comprised of three major topics: 1.The Regulation's extended scope of application, including pre-insolvency and hybrid proceedings, the relationship between Article 1(1) of the Regulation and its Annex A, as well as the interplay between the Insolvency Regulation and the Brussels Ibis Regulation; 2.the cooperation between main and secondary insolvency proceedings, the new instruments, such as "synthetic proceedings", destined to avoid or postpone the opening of secondary proceedings, further the cooperation between administrators and courts of different proceedings as well as protocols to enhance cooperation; 3.insolvencies of groups of companies, with a particular focus on jurisdiction, COMI-migration, "group coordination proceedings" and other instruments of coordination.