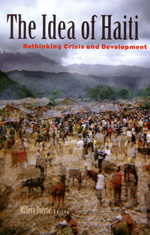 The idea of Haiti
rethinking crisis and development

After Haiti was struck by a devastating earthquake on January 12, 2010, aid workers and offers of support poured in from around the world. Tellingly, though, news reports on the catastrophe and relief efforts frequently included a pejorative description of the country that outsiders were determined to rebuild: the troubled island nation, a nation plagued by political violence. There was much talk of inventing a “new” Haiti, which would presumably mimic Western modes of development and thus mitigate political instability and crisis.

As contributors to this wide-ranging book reveal, Haiti has long been marginalized as an embodiment of alterity, as the other, and the idea of a new Haiti is actually nothing new. An investigation of the notion of newness through the lenses of history and literature, urban planning, religion, and governance, The Idea of Haiti illuminates the politics and the narratives of Haiti’s past and present. The essays, which grow from original research and in-depth interviews, examine how race, class, and national development inform the policies that envision re-creating the country.

Together the contributors address important questions: How will the present narratives of deviance affect international relief and rebuilding efforts? What do Haitians themselves think about Haiti, old and new? What are the potential complications and weakness of aid strategies during these trying times? And what do we mean by crisis in Haiti?.