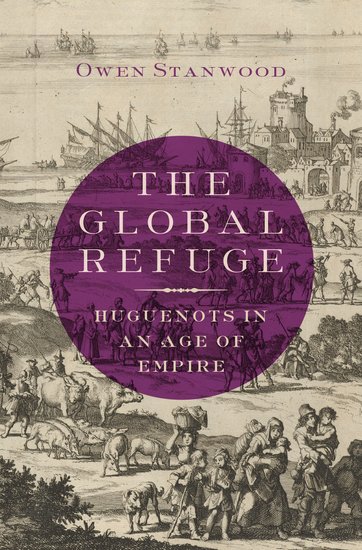 The Global Refuge
Huguenots in an Age of Empire

Huguenot refugees were everywhere in the early modern world. French Protestant exiles fleeing persecution following the Revocation of the Edict of Nantes in 1685, they scattered around Europe, North America, the Caribbean, South Africa, and even remote islands in the Atlantic and Indian Oceans.

The Global Refuge provides the first truly international history of the Huguenot diaspora. The story begins with dreams of Eden, as beleaguered religious migrants sought suitable retreats to build perfect societies far from the political storms of Europe. In order to build these communities, however, the Huguenots needed patrons, forcing them to navigate the world of empires. The refugees promoted themselves as the chosen people of empire, religious heroes who also possessed key skills that could strengthen the British and Dutch states. As a result, French Protestants settled around the world: they tried to make silk in South Carolina; they planted vineyards in South Africa; and they peopled vulnerable frontiers from New England to Suriname. This embrace of empire led to a gradual abandonment of the Huguenots' earlier utopian ambitions and ability to maintain their languages and churches in preparation for an eventual return to France. For over a century they learned that only by blending in and by mastering foreign institutions could they prosper.

While the Huguenots never managed to find a utopia or to realize their imperial sponsors' visions of profits, The Global Refuge demonstrates how this diasporic community helped shape the first age of globalization and influenced the reception of future refugee populations.

Acknowledgments
Introduction: A Vine in the Wilderness
1. The Beginning of the End of the World
2. Finding Eden
3. Dreams of Silk and Wine
4. Refugee Geopolitics
5. Disappearing to Survive
6. Making the Empire Protestant
7. A New Age of Projects
Epilogue: The End of the Global Refuge
Notes
Index