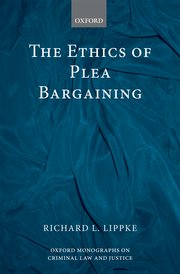 The ethics of plea bargaining

The practice of plea bargaining plays a hugely significant role in the adjudication of criminal charges and has provoked intense debate about its legitimacy. This book offers the first full-length philosophical analysis of the ethics of plea bargaining. It develops a sustained argument for restrained forms of the practice and against the free-wheeling versions that predominate in the United States.

In countries that have endorsed plea bargains, such as the United States, upwards of ninety percent of criminal defendants plead guilty rather than go to trial. Yet trials, which grant a presumption of innocence to defendants and place a substantial burden of proof on the state to establish guilt, are widely regarded as the most appropriate mechanisms for fairly and accurately assigning criminal sanctions. How is it that many countries have abandoned the formal rules and rigorous standards of public trials in favor of informal and veiled negotiations between state officials and criminal defendants concerning the punishment to which the latter will be subjected? More importantly, how persuasive are the myriad justifications that have been provided for plea bargaining? These are the questions addressed in this book.

Examining the legal processes by which individuals are moved through the criminal justice system, the fairness of those processes, and the ways in which they reproduce social inequality, this book offers an ethical argument for restrained forms of plea bargaining. It also provides a comparison between the different plea bargaining regimes that exist within the US, where it is well-established, England and Wales, where the practice is coming under considerable critique, and the European Union, where debate continues on whether it coheres with inquisitorial legal regimes. It suggests that rewards for admitting guilt are distinguished from penalties for exercising the right to trial, and argues for modest, fixed sentence reductions for defendants who admit their guilt. These suggestions for reform include discouraging the current practice of deliberate over-charging by prosecutors and charge bargaining, and require judges to scrutinize more closely the evidence against those accused of crimes before any guilty pleas are entered by them. Arguing that the negotiation of charges and sentences should remain the exception, not the rule, it nevertheless puts forward a normative defense for the reform and retention of the plea bargaining system. 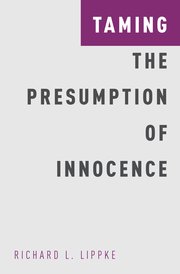 Taming the presumption of innocence